Mammographic density (also called ‘breast density’) is a term used to measure and compare the different types of breast tissue visible on a mammogram.

Breasts are made up of several different components that include fat, glandular tissue (the milk ducts and lobules) and connective tissue, which helps hold everything in place.

Breast tissue on a mammogram 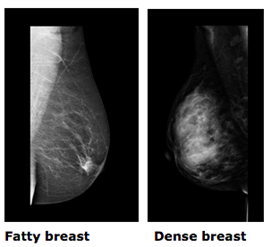 Mammographic density (MD) only describes how breasts look on a mammogram. It isn’t a measure of how the breasts look or feel, and it cannot be determined in a clinical examination by a doctor. Although breast density varies from one woman to the next, younger women and women with smaller breasts are more likely to have dense breasts. For a lot of women, breasts become less dense after menopause.

The level of mammographic density can be scored or rated by radiologists along a scale from mostly fatty (very low density) to mostly dense. One of the most commonly used scales is the American College of Radiology’s Breast Imaging Reporting and Data System (BI-RADS), which radiologists use to classify MD on mammograms as A, B, C or D. Sometimes a numerical scale of 1, 2, 3 or 4 is used instead.

Most women who have a mammogram (around 80 percent) will be somewhere in the middle of these two extremes.

Mammographic density varies widely from one woman to the next but in each woman, density levels tend to not change much across their lifetime. This is because, due to genetic and environmental factors, an individual woman’s level of mammographic density is thought to be mostly determined when the breasts first form.

Other factors that can influence mammographic density to some extent include:

All of these factors can change hormones in the body and influence mammographic density to some degree. However, while a woman’s mammographic density can decline with age, environmental influences or hormones, density is mostly determined when the breasts first form, so some women will always have a high density for their age or compared to the average, while other women will have the lower density.

Research also shows that breast density can itself be a risk factor for developing breast cancer.

Conversely, those with low breast density (Type A) have a lower risk of breast cancer than average.

However, it is important to note that:

I wasn't informed that I had dense breast tissue and that a mammogram or ultrasound could therefore miss an invasive cancer. I was originally treated for a stage 0 grade 2 cancer. Further cancer in the contralateral breast was missed at further screenings- BCNA 2017 Member Survey participant

We need more effective screening for breast cancer in women with dense breasts. My cancer was missed and was not picked up until I noticed a palpable lump 3.5 cm diameter. Accordingly I had to endure aggressive treatment i.e. Chemo, radio and bilateral mastectomy- BCNA 2017 Member Survey participant

BCNA has heard the voices of our members many of whom are distressed at learning that they were not informed about their level of breast density and were therefore unaware that screening mammograms may miss not detect a new breast cancer.

We are calling on the following areas of reform for women with dense breasts: