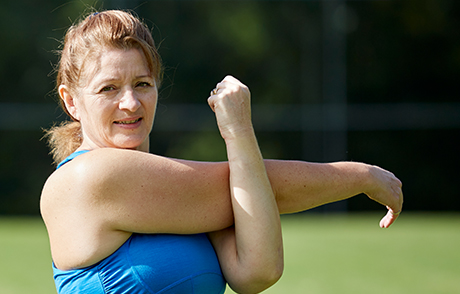 Susan was diagnosed with ductal carcinoma in situ (DCIS) in her right breast in 2015 and was treated with surgery and radiotherapy. Unfortunately, she was diagnosed with a new occurrence of DCIS in the right breast and lobular carcinoma in situ (LCIS) in the left breast in 2016. Susan had a double mastectomy, breast reconstruction, and was prescribed the hormone therapy drug tamoxifen – a daily tablet for five or more years. At a very emotional time, Susan and her husband found themselves confronted with a lot of choices to make in a short period of time:

The oncologist told me what it was. And within the space of her telling me and that devastation setting in, two hours later I was seeing a plastic surgeon. Everything happened so quickly.

Susan and her husband had private health insurance and were in a comfortable financial position. Susan’s husband worked full time and Susan worked part time. Their son was completing his final year of high school and lived with them in the family home, which they were in the process of owning. They had been over-paying their mortgage, so they had the option to redraw.

While Susan had worked as a registered nurse for many years and knew the health system well, there were still many costs that shocked her. For example, the high out-of-pocket costs for her reconstruction – $30,000 upfront – came as a surprise:

Their health insurance covered just over half of this amount, but Susan’s out-of-pocket for her reconstruction surgery was around $13,000. She is aware that having to find this much money up front is beyond the reach of most people, even those with private health insurance:

I can’t imagine how horrible it must be for someone who hasn’t got money to do a redraw. You may have private health but still, there’s going to be out-of-pocket costs.

Susan knew her surgeons, having worked with them and their colleagues in the past, and had confidence in them and their work. Even with this knowledge, Susan felt as though she needed more information about her choices and how much they would cost before she consulted with plastic surgeons:

The treatment that I chose … I will have to say I chose it but it was actually chosen for me. It’s really chosen for you by your surgeon. There’s not – you could do this or you could do that. It’s just a given. I’m not unhappy about it but it happened all very, very quickly and financially there wasn’t – we just didn’t even sit back and consider I suppose. I’m pretty logical but then you’re emotional and you’re not quite logical in that process. I’d like to see the options on paper first. If we were then actually presented with – okay this is your choice. You’ve chosen B. This is what’s actually going to be involved.

Susan feels that there are a lot of assumptions made in the private system:

Because the doctors aren’t psychologists. They’re not actually thinking how your thoughts are processing. They don’t understand your socio-economic status or what’s going on for your family. I would like to see people not assume so much, that you could afford it.

Being a private patient, Susan felt assumptions were made about her financial situation. For example, Susan wanted to have her radiotherapy in the public system. She found that she had to ask for that, because it was assumed she would be having radiotherapy privately:

Even though I said to my surgeon that I’d go public with the radiation, when she referred me to the radiology oncologist, they assumed I was private.

For Susan, the long term financial impacts of her breast cancer weren’t too significant. The family has delayed some renovations to their home and added a couple of years to their mortgage. She will have to have MRI scans as part of her follow-up care, which will be an ongoing out-of-pocket cost.

Susan is grateful that she had a large amount of sick leave saved, and was able to return to her work as a nurse once she was well enough. While she is very happy with the results of her reconstruction surgery, Susan would like to see people in her situation offered more information about their options and the costs associated with them, so they can make the choice that is right for them:

Before we went to see the plastic surgeon I would have liked to have known how much it was going to cost. It’d be nice to know the average price range of this operation without or with private health.