The long game of a breast cancer survivor

Nicole Armstrong is the 2022 Pink Lady Match Ambassador for the Round 15 match between Melbourne and Brisbane. Nicole was diagnosed with aggressive breast cancer last year during a COVID lockdown. The mother of three and lifelong Dees fan will represent all Australians affected by breast cancer when she delivers the match ball.

The Demons had 57 years of lessons in resilience, life- long Melbourne supporter Nicole Armstrong has had hers tested more than most too. Last year on the fringe of one of the world’s longest COVID lockdowns the mother of three had the mammogram that she had delayed and was diagnosed with breast cancer. “This is it!” She said to herself.

The irony was not lost on the 55-year-old who’d already survived a stroke and heart transplant in her forties. "I thought that when it came to health issues, I’d already had my share. I didn’t feel sorry for myself, but I did think this is unbelievable”. 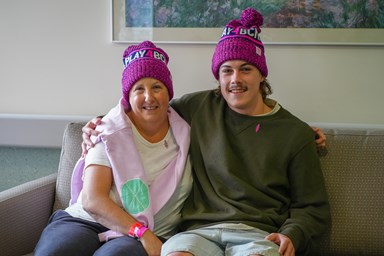 The Triple Negative diagnosis was the same as her mothers who has survived breast cancer twice. Triple Negative is one of the most aggressive forms of the disease and Nicole immediately underwent a single mastectomy and chemotherapy. COVID protocols required treatment in isolation but the upside was being able to watch the Demons as they blazed their way to the finals and break the premiership drought. Stoic in the face of her previous health scares Nicole was shocked by the emotions of losing her hair and in a blow to her emotional and physical recovery plans for a reconstruction were thwarted due to risk of infection.

Even more confronting she says was the well intentioned but misguided words of others such as "you’ll be ok, so many people have breast cancer" or "you’ve been through so much worse". She felt like her breast cancer was minimised against her other health experiences and yet this was the one she feared more than any other.

After receiving her heart transplant Nicole remembers and still feels an indescribable sense of gratitude to the generosity of her anonymous donor and it’s only now that she is seeking out others who understand what it’s like to be a heart recipient. Adjustment after breast cancer she believes is a whole new game. "There's no quick fix and there's much more beyond diagnosis and treatment. I’m in limbo because I’m not physically or mentally the same."

"BCNA’s podcasts on post treatment adjustment make so much sense. It’s going to take time to be comfortable with the next version of me and to tame the fear of my cancer coming back. Everyone processes things differently and at different times so it’s good to know that these resources are always available.”

Nicole knows recovery is a long game made easier with good support. “As a little girl I used to come to the MCG with my dad to watch the Dees and I’m thrilled to be the Pink Lady Match Ambassador. My heart(s) and those of my whole family beat true perhaps even more so now because of their long partnership with BCNA to support all women and men affected by breast cancer."