I had no idea men could get breast cancer

Phil Purnell, 64-year-old Tasmanian, had no idea men could get breast cancer. His wife Vicki, who had gone through her own cancer experience, made him get the lump checked and helped him navigate the surgical process throughout the added complexity of COVID-19 restrictions.

It was early March 2020 and COVID-19 was just starting to have an impact in Australia when my attention was drawn to my itchy breast. I didn’t think much of it, I was on medication at the time that could have caused it, but my wife Vicki suggested I get it checked out.

In hindsight she probably saved my life. At that point, I didn’t even know men could get breast cancer so if I hadn’t been married, I probably wouldn’t have done anything about it.

After some initial delays, the GP sent me for an ultrasound and biopsy which later revealed I had invasive ductal carcinoma stage 2 breast cancer. I was booked in for a mastectomy five days later.

The impact of the COVID-19 pandemic on my treatment was significant; prior to my surgery there was an increase in coronavirus cases at both the hospitals on the North West Coast of Tasmania and the entire area was put into lockdown. Before long the two hospitals closed and my surgery was cancelled.

Hospitals denied surgeons permission to operate on patients from the North West Coast so even when I finally found a surgeon willing to operate as a matter of urgency, it was cancelled at the last minute too. It was a really distressing time and I struggled with all of the waiting.

I was relatively positive through the whole experience except when my surgery was cancelled – that really got me down. You build yourself up to have something done and then you’re left not knowing when, or even where, it will happen.

I knew Vicki was worried. She had her own cancer experience four years ago so she knew that any delay could mean that the tumour spread to a lymph node which it ultimately did.

I finally got my surgery at the Royal Hobart, almost two months after finding the lump. COVID-19 made it a surreal experience. I was treated as if I had the virus. Doctors and nurses were in full protective gear, people were ushered away from me, and I was kept in a pressure controlled high dependency room.

My care at the Royal Hobart Hospital however, could not be faulted and my Breast Care Nurse in Hobart has been absolutely brilliant. 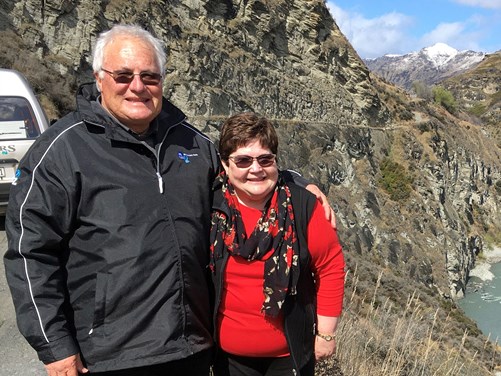 I am so thankful for Vicki’s support. You just couldn’t go through something like that alone. I know it was hard for her, not being with me in the hospital. It’s over now, apart from a few check-ups and I’m looking forward to getting on with my life and back into my garden. We also hope to do the Wilderness Train Trip from Strahan to Queenstown over summer and hopefully get to Canberra to see my daughter.

My final message on Male Breast Cancer Awareness Day is to all the men: get it checked out. I nearly left my run too late and maybe it was made worse by the delays caused by COVID, but don’t let other problems or issues stop you from getting medical treatment because apart from saving your life it can also reduce the recovery time and the worry for your family and friends.