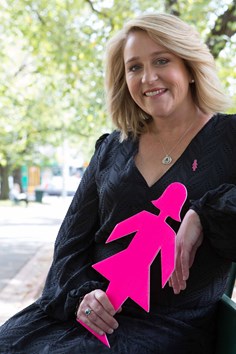 She has an exceptional understanding of the cancer sector having spent over a decade at BCNA and five years at Cancer Council Victoria where she was responsible for delivering communications and campaigns around prevention messages.

Kirsten has held a variety of roles at BCNA including:

Highly regarded for her passion and focus on Australian women and men who have been affected by breast cancer, she is committed to giving everyone a voice and reducing the disparity of care across the country.

Kirsten firmly believes that members are at the heart of what we do at BCNA and is dedicated to delivering services and supports that ensure women, men, families, colleagues and friends affected by breast cancer have a place to turn to for information, connection and support.

Her deep connection to our 160,000 members was recently cemented after spending 18 months travelling around Australia interviewing more than 3,500 women and men about their experience of breast cancer treatment and services to find out where the gaps in service delivery are occurring. The findings were outlined in the State of the Nation report, which was delivered to Federal Parliament in June 2018.

She is also proud of the work she has done to turn the spotlight on important issues such as access to breast reconstruction for women in Cairns and driving changes to the Australian healthcare system including access to drugs through the PBS such as the CDK inhibitors for Australians with metastatic breast cancer.

Taking up the role in BCNA’s 20th anniversary year was not lost on Kirsten who is committed to working closely with members, staff and partners such as Bakers Delight, Berlei, Sussan, Red Energy, Focus On Furniture and Australian Paper to ensure that we can continue to ensure that Australians affected by breast cancer receive the very support and care appropriate to their individual needs.

Born and raised in Western Australia, she lives in Melbourne with her partner and two sons.