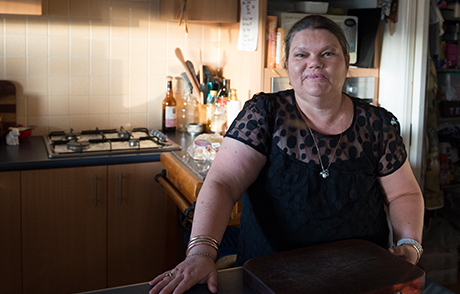 When Ruth was diagnosed with breast cancer in November 2013, she was 38 weeks pregnant with her first baby. This challenging situation was made even more difficult by her location: Ruth and her husband lived in Kalgoorlie WA, where they both worked as high school teachers. Ruth’s treatment was in Perth almost 600km away from home.

The Western Australian Government funds a Patient Assisted Travel Scheme (PATS), which provides a subsidy towards the costs of travel and accommodation for people like Ruth who need to travel long distances for their cancer treatment. While Ruth found PATS helpful, especially during her chemotherapy treatment, she still had out-of-pocket costs to meet because the PATS payments did not cover the whole cost of travel and accommodation:

PATS flew me to Perth to do my chemotherapy so that was really fantastic. But the costs they didn’t meet were taxi fares from the airport to the hospital and back again. They did meet some of the cost of accommodation. I stayed with a friend, they did reimburse me, I think they gave me about $70 per night but it wasn’t enough to cover petrol and food, lodging at a friend’s and just being away from home.

When it came time for her daily radiotherapy treatment, Ruth relocated to Perth with her newborn son. Being away from her husband, who had to stay in Kalgoorlie for work, was hard:

When I moved to Perth for my radiation my husband couldn't come because he had to stay and work. He wasn’t going to be given six weeks off work to look after me. He would have had to take leave without pay -  that’s not viable. He just had to come to Perth on the weekends to see the baby and me.

During the week, while the friend she was staying with was at work, Ruth had to look after herself and her son without much support:

My friend works so it was just me and the baby. I got really tired from the radiation treatment. And then I had to drive myself to radiation and then drive myself home. I pretty much did it on my own.

A few years on from the end of her active treatment, Ruth still needs to travel to Perth regularly for her follow-up appointments. Follow-up care is very important to her as she wants to be as healthy and well as possible. But she has found that PATS does not subsidise flights from Kalgoorlie to Perth for these appointments. PATS will subsidise a train fare or give Ruth a fuel card, but both of these transport options involve being away from home, work and her young family for a longer time. Ruth pays for flights to her follow-up appointments herself:

Now it's after treatment, PATS won't acknowledge flying as part of the follow-up process. They’ll give me a fuel card to drive or pay for a train fare. But the train is seven hours and the car is six hours so it's easier to fly. I have to pay for that myself. Then they’ll pay like $40 private accommodation and they’ll pay up to $70 if you take a hotel, but the average per night cost of a hotel in Perth is $130. The money that the State Government provides doesn't cover it.

Ruth and her husband were in a good financial position before the cancer diagnosis. They were renting, had private health insurance and were planning to visit her husband’s family in Zimbabwe so they could meet their son. Having to meet the out-of-pocket costs associated with breast cancer has left a big dent in the family’s finances and changed their plans. The family hasn’t been able to go to Zimbabwe because of the financial impact of breast cancer:

My husband had to go to Zimbabwe alone because there's not that extra money for us all to go.

Ruth returned to work sooner than she had anticipated because the family needed the money. She would like to have been able to stay at home with her son for longer:

Because of medical bills, other bills, I had to go back to work. I didn’t have the luxury of being able to stay home with the baby.

Ruth is very grateful to her medical team for helping her to be a breast cancer survivor. However, the significant costs of having to travel for cancer treatment and being away from home for extended periods has been difficult for Ruth and her family:

So with all the bills and all those costs, you take a blow. It's been a huge burden. It’s time away from normality.