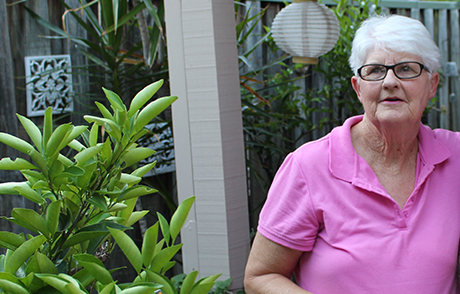 Penny has had two experiences of early breast cancer: the first in 2004 and a second primary breast cancer in 2014. The financial impacts of these experiences were very different. In 2004, when Penny had private health insurance and was treated as a private patient, she had high out-of-pocket costs. By the time of the second breast cancer in 2014, Penny and her husband had cancelled their private health insurance policy. Penny received her 2014 treatment in the public system, where the only out-of-pocket cost Penny had was for parking at the hospital.

Before her first breast cancer, Penny and her husband were retired. They owned their own home, had recently done some travel and were on a comfortable budget. They held top-level hospital cover with their private health insurer. Penny got the news that she had breast cancer in 2004, and was scheduled for surgery the following week to remove the lump from her breast and the lymph nodes from her armpit.

Penny was surprised at the high out-of-pocket costs for her breast surgeon and the anaesthetist. These high costs increased when she needed a second surgery soon after the first to make sure all the cancer was removed.

Penny spoke to her health fund about the high out-of-pocket costs, and was told that if she wanted to avoid out-of-pocket fees, she should have gone to a different surgeon:

I queried the gap with the private health fund and she said to me, ‘Well you’ve got the wrong surgeon’ and I said, ‘Well when you’re told you’ve got breast cancer, you don’t say “hold on a minute, I’ll go find another surgeon”’. You’re sort of overwhelmed by the diagnosis and you want to get the treatment. I had confidence in him but not in his bills. You can’t change your anaesthetist, because the surgeon chooses his anaesthetist. It was a lot of money that we weren’t expecting to have to pay.

As well as having to pay high out-of-pocket costs for her surgeries, Penny found that her top level hospital cover did not mean she would get the level of treatment her private health insurance policy specified. For instance, Penny’s policy was set at a level which included a private room:

She also found that she was not in a breast surgery ward and the nursing staff on the ward were not familiar with the techniques used by her surgeon. This meant that a blocked surgical drain was not dealt with appropriately:

It was a disaster, because my drain blocked overnight. The nurses on the ward didn’t even know how to attach the type of drain that my surgeon used.

Because of their unhappiness with Penny’s private health fund, Penny and her husband decided to cancel their private health insurance policy when they were later reviewing the household budget.

Not only were we paying the premiums, but I didn’t feel that we got value for money. I just thought, ‘this is ridiculous. We’re paying all this money and I haven’t received the benefit I would expect at all.’ Paying the amount we were paying in premiums, I would expect to have had comfort and security of knowing that the treatment was going to be covered and paid for. Knowing that because we were paying top hospital cover that it meant top cover, not these big gaps.

After finishing treatment in 2005, Penny and her husband continued on with their retirement, doing some ‘enjoyable grandparenting’ with their seven young grandchildren. They were on a tight budget and had downsized to a smaller place.

When Penny was diagnosed for a second time in 2014, she was treated in the public system. She was very pleased with the standard of care she received, and she and her husband were relieved to know that they would not have to pay a large gap payment for her treatment. It reduced the stress and worry of the cancer journey, to know that this new instance of cancer would not affect their financial circumstances like the first one in 2004 had:

It hadn’t really affected our circumstances. The government doesn’t want to hear that one ditches the private system and then is very happy with the public system. But I was. We didn’t pay a penny, and I had excellent care. They’ve got a service called ‘hospital in the home’, so when you’re discharged, if you still need treatment, they’ve got a home nursing service.

Penny also benefited from having access to a breast care nurse as part of her treatment the second time around:

They’ve got the breast care nurses at the clinic that you get to know, and I found it good.

While Penny is very positive about her treatment as a public patient, she feels that, to some extent, public patients are not treated as well by specialists:

You almost feel like a second-class citizen, because if you want to see a specialist, if you need treatment, a lot of the receptionists say, ‘Oh no, Mr. So-and-so doesn’t see public patients.’ It is a double-edged sword, because you get, as I say, really good treatment and we didn’t have to pay for any of it.

Thinking about her two experiences of breast cancer, the first private and the second public, Penny suggests that others with private health insurance consider the options. This includes getting information about out-of-pocket and gap costs for surgeons and anaesthetists, even though the time immediately after a breast cancer diagnosis is an emotional time:

Not going into it quite so blindly in terms of finances, finding out more what the financial impact was going to be. On the other hand, again I think that when you’ve had a diagnosis of cancer, the financial side of it is probably not your main concern. If I could have my time over again, I might have looked at changing surgeons. I think that’s something one needs to find out, does your surgeon charge the scheduled fee? I don’t think there are a lot of them around who do. It seems to me that most of them charge more.

I wouldn’t hesitate to do what we did and go with the public system, because the treatment for someone with breast cancer, particularly in Perth, seems to be very good. I have heard reports about people having difficulties waiting for operations for cancer, but I didn’t experience that at all.