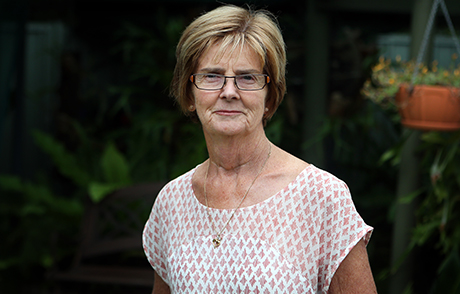 After surviving thyroid cancer, Lynne was retired and enjoying life being active and well with her husband. When Lynne was diagnosed with breast cancer in 2015, it came as a surprise.

Lynne’s medical oncologist suggested that she undergo a gene assay test called Oncotype DX to help determine if she would benefit from chemotherapy. The oncologist explained that because Oncotype DX testing is not subsidised by Medicare, the cost to her would be around $4,500.

Driving back from her appointment with the oncologist, Lynne and her husband decided they would pay for the Oncotype DX testing. Lynne knew chemotherapy can be difficult. The Oncotype DX test predicts the risk of the breast cancer coming back. If the test showed Lynne’s cancer had a low risk of recurring, she would be able to avoid having chemotherapy.  The test showed that the risk of Lynne’s breast cancer returning was low, helping her to make the decision that chemotherapy could be avoided. She is glad she was able to have the test and avoid chemotherapy, albeit with the out-of-pocket costs:

It just saved me going through what they go through with chemo. I've got friends that went through chemo and I just thank God that I didn't have to do that.

The $4,500 that Lynne spent to have Oncotype DX testing was not covered by Medicare or by Lynne’s health fund. Lynne and her husband feel it was a good decision to spend the money to have the test done. They were in a financial position to afford it, but they know that others are not:

We had superannuation put away. We did not bat an eyelid in getting that money out. I feel so sorry for men and women, with young families who don't have a lot of money and who just can't afford to do that.

If Lynne had not been able to afford the test she would have borrowed the money, either from family or through a bank loan, because she feels it is worth it to know that her treatment decisions were made with the best possible information.

The rest of Lynne’s treatment was covered by her private health insurance with no out-of-pocket costs to her:

The surgeon and the anaesthetist - I didn't have to pay them anything extra. I just happened to have the right team of doctors around me.

Other expenses Lynne had as a result of her breast cancer included the cost of mastectomy bras and prostheses, both of which Lynne found expensive and uncomfortable.

By far the most significant expense for Lynne was the Oncotype DX testing. Lynne benefited from having Onco DX testing, and would like others to be able to as well:

If Oncotype DX was available through Medicare at a more reasonable price I think a lot more people would have it done so they don't have to go through chemo.