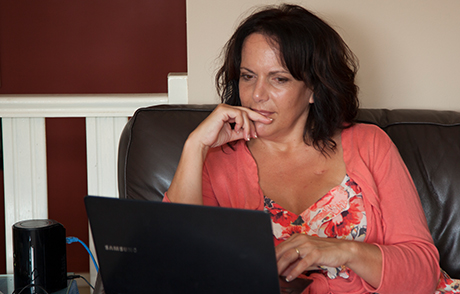 When Louise was diagnosed with breast cancer in June 2012, she and her husband were in a good financial position and looking to travel now their children, 16 and 21, were getting older. They had a mortgage and were enjoying life on the Central Coast of NSW. As a result of Louise’s cancer diagnosis, their plans to travel overseas were replaced by trips to Sydney for cancer surgery:

I guess the additional cost is that my family and I moved to Sydney for a couple of weeks for surgery. But that would have cost probably maybe another $1,000 or more.

Having worked in her role in the vocational education sector for many years, Louise had plenty of sick leave, annual leave and long service leave available to her. This was a big help to the family financially as it meant that the household income did not change significantly as a result of her breast cancer diagnosis. Louise and her family faced some challenges, however, because of they lived in a non-urban area.

Louise found that living in a non-urban area changed the way her treatment options were presented to her. This was particularly the case with her breast reconstruction surgery:

Instead of saying to me ‘what type of reconstruction would you like’ or ‘let's chat about what might be available’, the question was about ‘where do you want to have the surgery? Do you want to have it on the Central Coast or do you want to go to Sydney?’ Without knowing the reason, without knowing the impact of my choice, I said, ‘I'm happy to stay on the Central Coast’, not realising that straight away that cut my options in half, you know. So if she had have asked me a different question - if she was better informed and had resources at the ready - then I would have had an easier time of it.

Doing her own research online made Louise aware that there are a range of reconstruction options available which had not been discussed with her. Based on this discovery, she decided to seek a second, and then a third, opinion on the best reconstruction options for her. In total Louise met with five surgeons to feel adequately informed. Travel time involved to get these opinions and pay for each consultation was another financial burden for her family. Louise wanted this information but was annoyed that she had not been given it at the first consultation, which may have allowed her to avoid these appointments with other surgeons:

I went to the one in Sydney who works up here and it wasn't until about that third one that I actually understood that the procedure that I was asking about couldn't be done on the Central Coast. So it was kind of twofold - because of that lack of information it meant that I had to go and spend all that money to find out that it was impossible in the first place.

Louise would like to see women provided with more and better information up-front, especially women in non-urban areas, as they bear the additional cost and time burdens of having to travel for appointments:

Good information saves you money so you're not running around all over the countryside trying to work out who's the best person and what can be done. So you really you needed that information straight away, upfront.