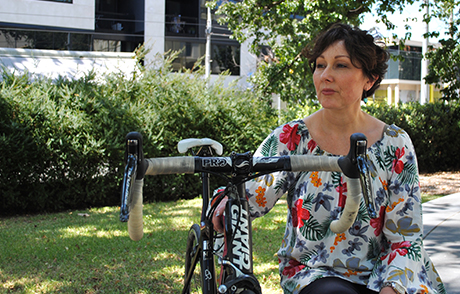 Working in the country with the South Australia Police, Kylie’s work life was ‘24/7’. Dedicated to her role with the police, but potentially planning a career change in the future, Kylie was preparing to take some leave to study for her Masters of Business Administration (MBA). Her plans were put on hold when she was diagnosed with breast cancer in February 2015.

Kylie immediately went on sick leave as she could not work in the country while having her treatment in Adelaide. Kylie moved back in with her parents who lived in Adelaide, so she could be closer to treatment and have hands-on support. Kylie missed her independence:

I had to immediately move back to Adelaide because there are no services in the country. I had to relinquish my job position and I was replaced by a colleague. I had to move in with my parents. I lost my independence.

Just over a year after completing treatment, Kylie has returned to work with the police, although in a different role. Her return to work has not been easy. Because she is still coping with the ongoing side-effects of her cancer treatment, she would like to work part-time, but her workplace’s demanding culture does not easily accommodate part-time work arrangements. Promotions that would have been open to her before her cancer diagnosis are not open to her now because her health limitations mean she cannot be ‘on call’ in the way that she would be expected to be in these roles. Kylie’s career development has been impacted by a workplace culture that does not easily accommodate the need to maintain a healthy and balanced lifestyle, limiting exposure to stressful environments and the need to step back when fatigued. This limits the roles in which she can perform.

My workplace has been fantastic in managing my return to work, however whether I will be considered for future promotion with the limitations I now have on my working arrangements will remain to be seen. I was recently overlooked for a promotional opportunity despite being one of the most senior and experienced people to apply. In fact, I was not even considered for interview.

As a single person without a partner to support her and contribute financially, Kylie is especially aware of how changes to her income may affect her in the coming years. Her plan to study for an MBA and prepare herself for a potential career change has been put on hold because of her health. The financial impacts of breast cancer have changed how the rest of Kylie’s life will be:

What I thought was going to be my future capacity to develop my career, progress my career, and also set myself up in a position for retirement later on down the track has changed and I’ve had to rethink everything about my life going forward.

Before she had cancer, Kylie lived alone. Now, aware that her earning capacity is reduced, Kylie has chosen to save money by sharing a house with a housemate. This allows her to afford treatments recommended by her oncologist, such as psychology, acupuncture, yoga classes, an ongoing supported exercise program and naturopathy. She finds these treatments helpful but expensive. Living with a housemate means Kylie can save money to travel, a goal that has become more important after her cancer experience. Obtaining travel insurance was difficult, however, and the policy was more expensive because of her history of cancer.

Kylie describes the health care she received as ‘extraordinarily fantastic’. While her health was well looked after, she feels she would have benefited from a financial advisor to help her sort out her finances, and advise her on minimising the financial impact:

Working with a person through that journey. So some sort of free, independent advice would’ve been enormously helpful.