This year BCNA is celebrating its 20th anniversary. It has now been 25 years since Lyn Swinburne was diagnosed with breast cancer and found the experience isolating and terrifying. In 1998, a few years after her own diagnosis, Lyn decided to start a network to help create a better journey for people facing their own breast cancer diagnosis. She gathered a group of women and formed an alliance of survivorship, which was to become the beginning of Breast Cancer Network Australia.

Throughout the year there will be a number of events and campaigns to celebrate all that has been achieved during BCNA’s 20 year history, many of which will acknowledge the people who have shaped our organisation and helped create a better breast cancer journey for Australian women and men.

State of the Nation

This year BCNA will also launch its State of the Nation project, which will highlight the gaps in breast cancer treatment and care across the country. The report is the result of more than 10,000 surveys completed by BCNA members and 3,500 face-to-face consultations around the country. The State of the Nation report is a key piece of work that will shape BCNA’s advocacy agenda for the future.

The year’s calendar will also include Pink Lady luncheons in Sydney and Brisbane, for the first time a Gala Ball in Melbourne and a mass planting of silhouettes at Parliament House in October for Breast Cancer Awareness Month to replicate the inaugural Field of Women in 1998.

For information on everything that is happening throughout the year and how you can be involved keep an eye on the BCNA website and social media channels. 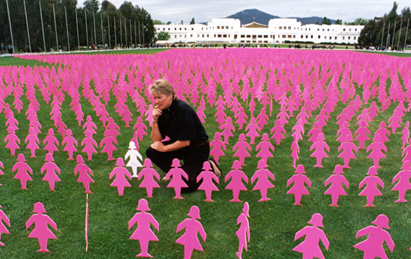 Raelene Boyle at the inaugural Field of Women in 1998