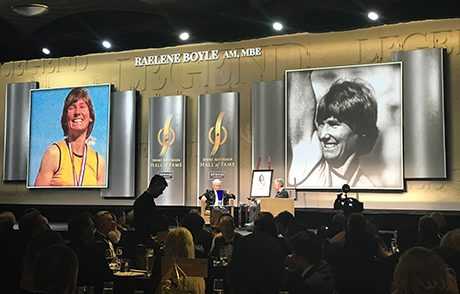 One of Australia’s highest honours, the Legend status recognises those Australians who have distinguished themselves at the highest level, and in doing so have offered inspiration and an example to the community.

But for many BCNA members, Raelene has always been thought of as a legend.

Raelene has been involved in BCNA since 1998, shortly after its inception, and became a founding member of the BCNA Board in 1999, a position she still holds today.

Over almost twenty years, Raelene has now presented at 474 Information Forums in regional and metropolitan areas across Australia. She has reached more than 18,500 women and their families through these forums alone.

She travels from her home on Queensland’s Sunshine Coast to attend many of BCNA’s major functions and to speak to other groups and organisations about the work that BCNA undertakes.  Raelene does this on a voluntary basis, at no charge to BCNA.

From forums to conferences and beyond, Raelene openly shares her challenges with depression following her breast cancer diagnosis and gives practical and realistic ways for BCNA’s members to get back to being physically active.

Raelene has also had a huge impact on BCNA’s fundraising efforts. Her generosity in “donating” her 50th and 60th birthday celebrations raised over $800,000 for the organisation. These funds have helped to develop and sustain key information and support services for BCNA’s 120,000 members.

BCNA CEO Christine Nolan said that Raelene’s honesty and openness in talking about her own journey with breast and ovarian cancer is an inspiration to others travelling a similar journey.

‘Raelene’s work for BCNA and women with breast cancer is all voluntary and performed with dedication and passion.  She is always willing to undertake whatever role BCNA wishes of her – from guest speaker at a large corporate function, to thanking our sponsors and supporters with personal phone calls of gratitude, to meeting women at a BCNA information forum and speaking to an individual woman struggling with her diagnosis,’ Christine said.

‘Her extraordinary selfless contributions to the community over many years, against a backdrop of her own health and personal challenges is much deserving of Legend acknowledgment. We are just so proud to call her ours,’ she said.