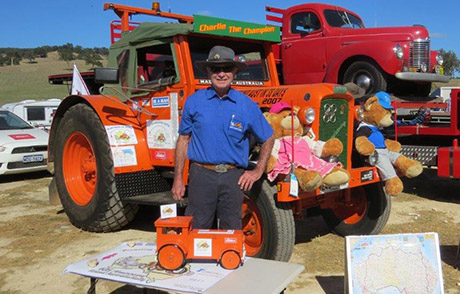 BCNA has been announced as a charity partner of Tail End Charlie, the tractor traversing through Australia on its 60th anniversary run.

Ron Bywaters, the original driver of Tail End Charlie at the Mobilgas Round Australia Rally in 1957, will be behind the wheel again in 2017 to raise funds and awareness for BCNA and the Prostate Cancer Foundation of Australia (PCFA).

He will be joined by a team of 13 people who will take in turns driving Tail End Charlie, which can reach speeds of 80 kilometres per hour.

Ron also took his trusty tractor out in 2007 for a 50th anniversary run that raised $22,000 for the Breast Cancer Association of WA and PCFA.

Ron was inspired to support BCNA after his sister’s diagnosis of breast cancer, and sees the trip as a way of ‘giving back’ to communities around Australia

‘Our tractor will go around to many different rural and remote areas, some with less services around than us city folk have,’ Ron said.

‘This is a way to raise awareness of the wonderful work BCNA and PCFA does, as well as highlighting the importance of early detection,’ he said.

Ron and his team will be paying for all travel expenses out of pocket, with every dollar raised going towards PCFA and BCNA.

To show your support in a town near you, visit tailendcharliethetractor.org/2017-itinerary/ for a complete itinerary.

You can also make a donation to Ron and the Tail End Charlie team at pcfafundraising.org.au/event/tailendcharlie.